After surpassing more than three decades on the road, the Red Hot Chili Peppers show no sign of slowing down. In fact, the band is doing just the opposite, as they wrapped up their four month European leg of The Getaway Tour and began their North American leg in San Antonio, Texas last night. With the largest kinetic light display in touring history, the Red Hot Chili Peppers have literally lit the path for a new concert-goer experience. 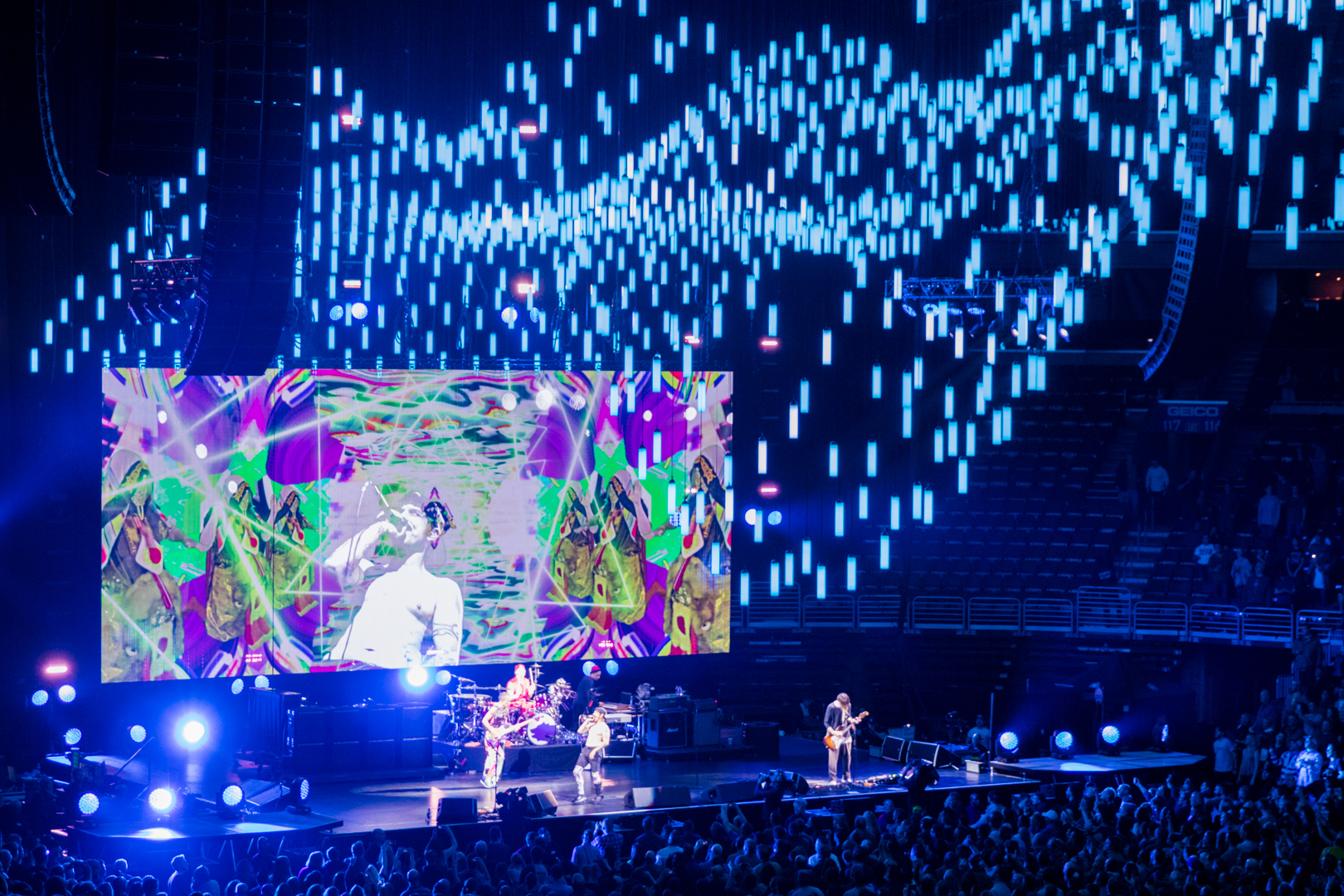 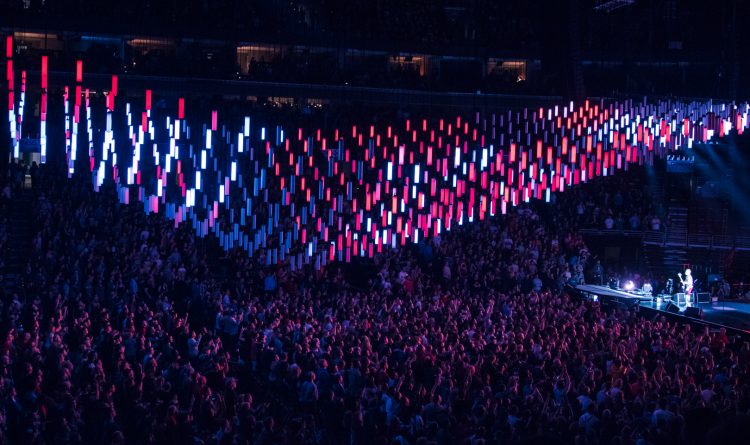 For the past few months, the Peppers’ The Getaway Tour has trended on the internet. Almost instantly after they opened in Budapest, fans took to Twitter describing The Getaway Tour as “#OneofftheBucketList,” “the greatest,” and “the best light display I’ve ever seen!”  Needless to say, the Chili Peppers performed a high-impact show in sync with a kinetic grid of glowing lights that ascended and descended over the audience.

Last night, the Peppers didn’t disappoint. The crowd stood eager, anxious and excited while awaiting the bands presence. When the trio took to the stage, the audience went wild and remained standing throughout the night while the band performed and the kinetic light display morphed into colorful waves and designs above their heads.

Once again, social media erupted with comments, photos and videos showcasing the scene: “Last night was the best night of my life” – @denayg; “had an experience of a lifetime” – @abbaegrace; “Red Hot Chili Peppers delivered!” – @amycraftphoto; “Amazing show Chili Peppers!” @jubalgarcia; “By far the best concert I have been to” – @Jonny_baloona; “Best night ever” – @hector2900; “Never have I ever seen such an awesome set up” – @l.andm.e.

Videos of the kinetic light installation flooded social media and many who are attending the concert in a different city, shared in the excitement of experiencing the “light show” and officially becoming a part of a group who have experienced an “otherworldly” concert. 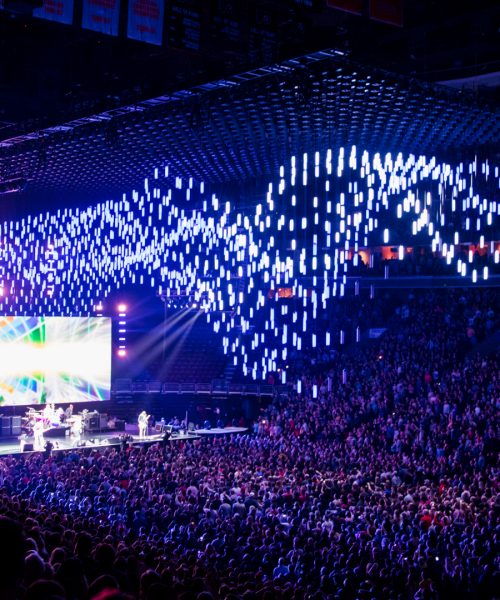 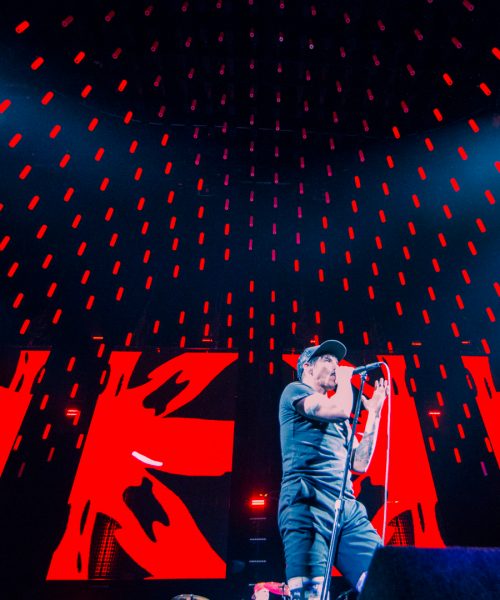 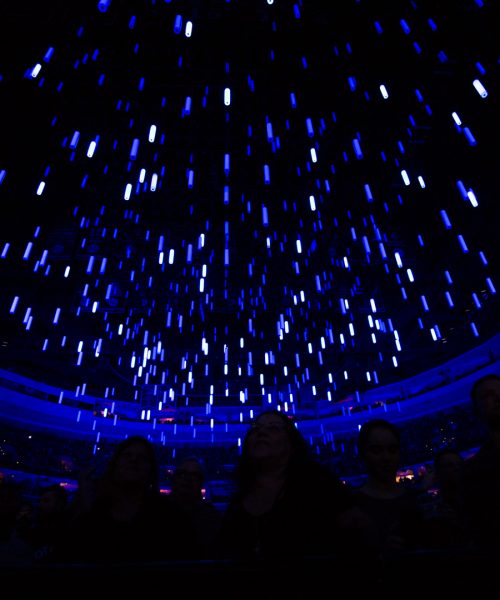 The kinetic light display, composed of over 1000 TAIT Nano Winches, ascended and descended while changing colors and forming different patterns as the band rocked out on stage. The rhythmic lighting and diverse movements of the fixtures accompanied the bands’ lyrics with the articulations changing the atmosphere to mirror the vibe of the audience. The elements of art, music, and technology created an interactive, 3D experience that the Peppers and their team strived to ignite when first contemplating the show design.

The team, which includes Production Manager, Narci Martinez, Production Designer, Scott Holthaus and Manager, Peter Mensch of Q-Prime, immediately began searching for the latest in technology as their design concept strayed from standard lighting concepts and numerous trusses. After numerous conversations and viewing TAIT’s latest product, the TAIT Nano Winch, the team determined that TAIT would be the provider of staging, automation, and the spectacular kinetic light display.

In a Youtube video titled, Scott Holthaus and Leif Dixon: Lighting and stage design for the Red Hot Chili Peppers 2016 tour,Holthaus shares that they chose TAIT to manufacture the kinetic sculpture and be the automation provider, not only because of the long-standing relationship, but because the packaging, post-production and system integration was vital in setting up, breaking down and transporting the show in an easy, efficient and clean manner. “This whole system, including lights is like twelve big pieces, it’s like a toy,” he continues, “it’s lots of big bits instead of lots of little bits.” Additionally, Holthaus explains that TAIT Navigator, the automation system operating the kinetic light sculpture, is the “brain and the mother” of the kinetic sculpture’s movement, and the cues can be created in many different programs including touch designer, catalyst or directly from the desk.

Because of Navigator’s easy usability, the band and their production team can continue to change the looks of the installation, whereby making each show different than the last.

Dubbed as “One of the Ten Best Concerts this Week,” by the Dallas Observer,” the Red Hot Chili Peppers have outdone themselves, once again, shocking their fans with the largest kinetic light installation in concert touring history. The European leg of The Getaway Tour came to a close in December 2016 and the North American leg of the tour commenced January 5th, 2017 at the AT&T Center in San Antonio, Texas.