Another Consumer Electronics Show (CES) is in the books! The country’s biggest consumer electronics show took place at the Las Vegas Convention Center and featured 3,900 exhibitors who shared their latest tech, gadgets and widgets with the world.

Hours before the show floor opened to the public, a dynamic and technologically diverse keynote presentation was delivered to a massive audience. The creation and design of the keynote was activated by a team of live event experts including Executive Technical Producer John Halloran & Associates, who was responsible for the deployment of the entire show, Bill Welter, owner of Clarity Creative and Executive Producer and Creative Director for the show, Production Designer Todd Ivins, Executive Art Director, Gregg Stokes, and TAIT Towers, entertainment automation specialists and stage producers for the show. 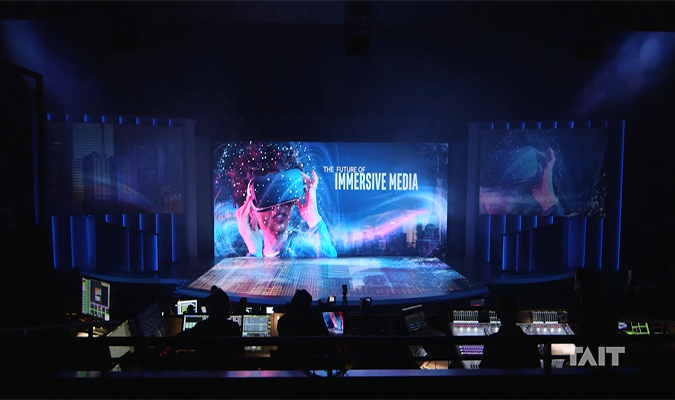 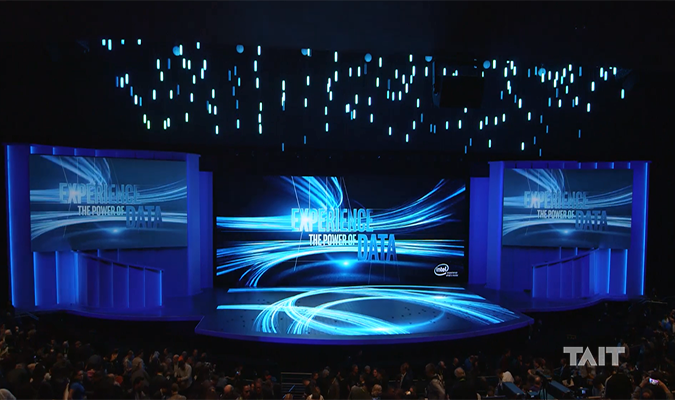 The goal of the keynote? To share what the future of technology looks like in the most immersive and interactive way possible. An activation of this scope and magnitude required precise execution and incredible collaboration. John Halloran and team relied on TAIT for entertainment automation and stage production. The staging included an extra-large rolling stage, hexagon-shaped wall columns and an overhead rigging system which was fastened with a grid full of TAIT Nano Winches, TAIT Nav Hoists and TAIT Rollios. Additionally, during the initial concept stages, TAIT developed and created a VR simulation that allowed the client to experience the space and visualize the keynote presentation as a viewer in the audience.

Prior to the keynote kicking off the Consumer Electronics Show, the audience was treated to a performance by the world’s first ‘data-only’ band, Algorithm and Blues. Musical Director, Kevin Doucette, his band members and two avatars, Ella and Miles, performed on stage using Aerodrums and a Yahama piano which sent data in real time to AI algorithms that processed the data and created new MIDI notes for Ella and Miles to play on guitars. Because Ella and Miles were Avatars, they were presented on four, larger-than-life, portable projection screens called TAIT Rollios that stretched open 55 ft. and were operated via TAIT Navigator.

Though Doucette’s musical performance was the first implementation of the Rollios, it certainly was not the last. The four, 16 ft. wide Rollios were used throughout the entire keynote presentation as projection surfaces. FUN FACT: With a maximum deployment of 55 ft., the Rollios can open and close at 3 ft. per second from any area in space while projecting video content. 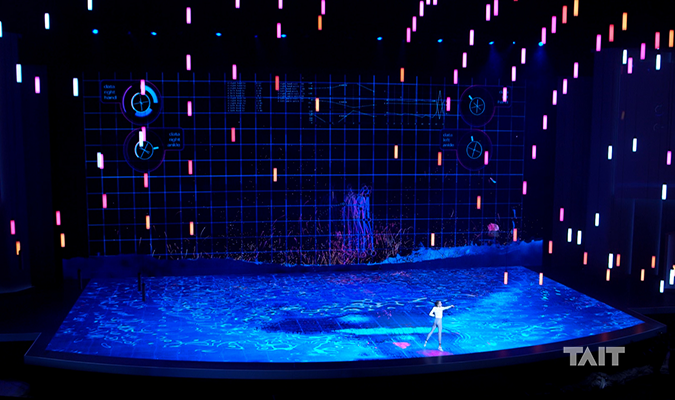 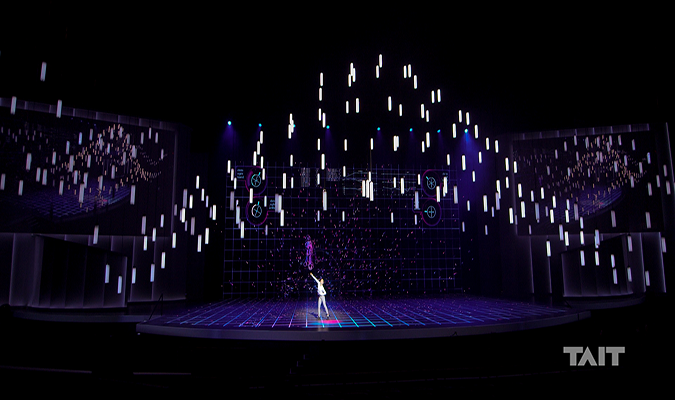 Another musical presentation included twelve-year-old dancer, Sophie Santello. During her performance, a brilliantly illuminated and kinetic light display danced above the stage. The display was created with TAIT Nano Winches that deployed 250 LED cylinder light fixtures and 24 opaque LED spheres forming multiple patterns and dynamic movements. Through the power of Navigator, the kinetic light display traveled 60 ft. perpendicular to the stage and moved as fast as 10 ft. per second.

The kinetic light display was also featured at various moments throughout the keynote. One such time was in describing data communication where laser beams bounced from one light fixture to another. 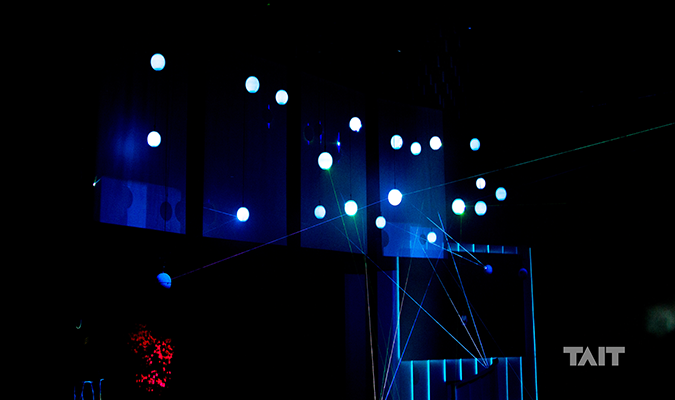 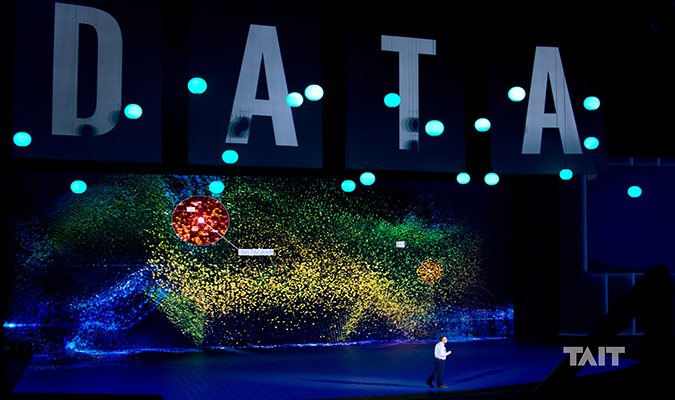 In addition to the kinetic light display, TAIT’s overhead rig was also equipped with several Nav Hoists. TAIT Navigator triggered the Nav Hoists to lift a 195 ft. wide automated video screen and move it for multiple transitions throughout the keynote. 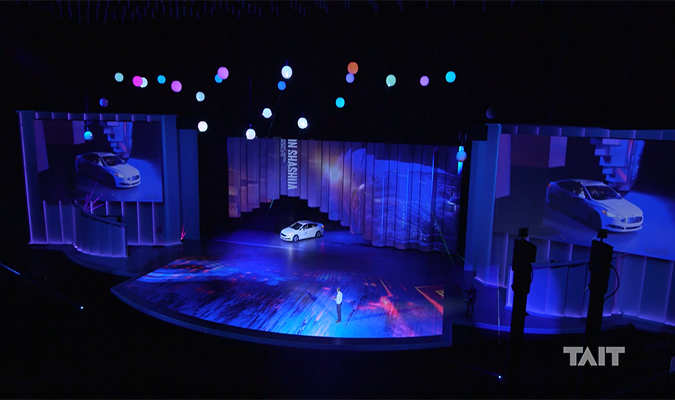 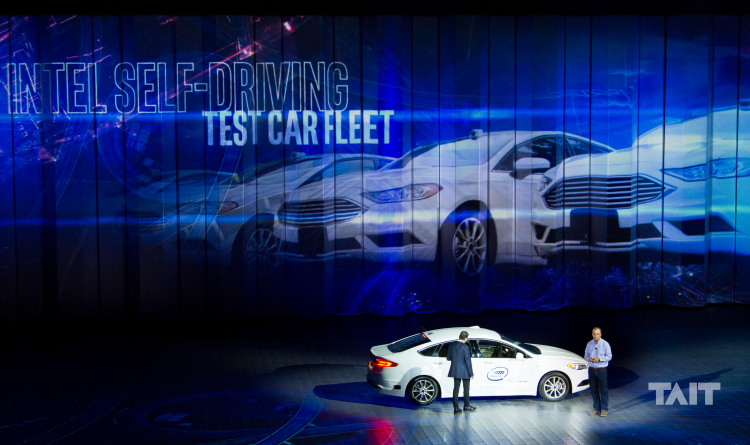 The Keynote presentation not only invited attendees to take a glimpse into the future of technology but it also gave attendees the opportunity to experience the power of data first-hand. 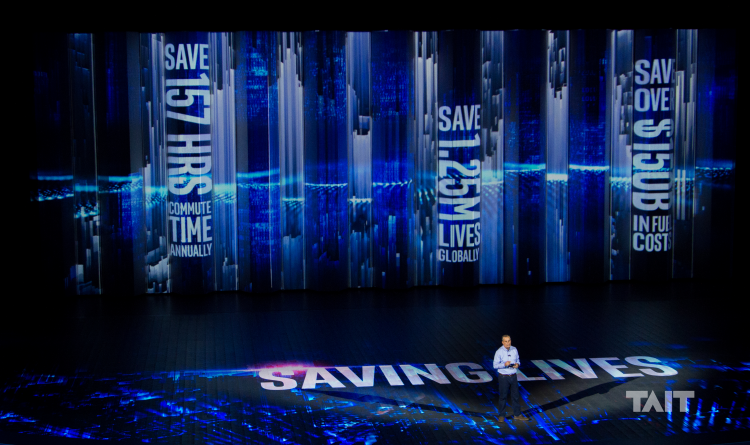 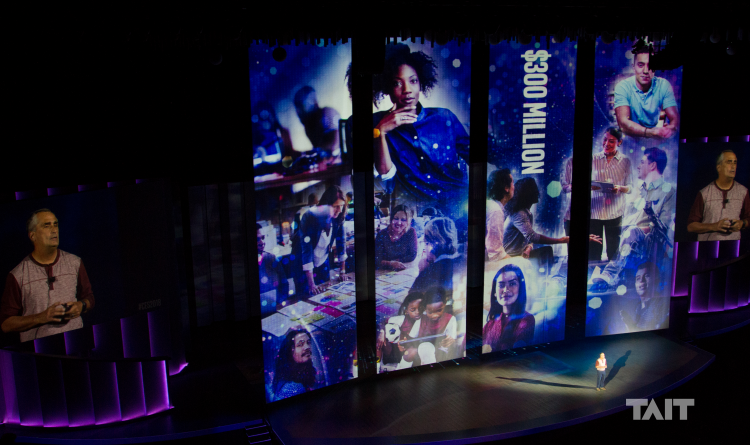 Though the 2018 Consumer Electronics Show has now officially been closed, the Keynote is still available to view here. 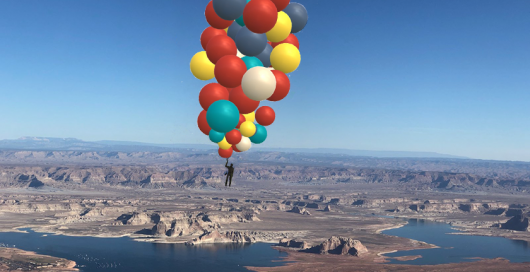 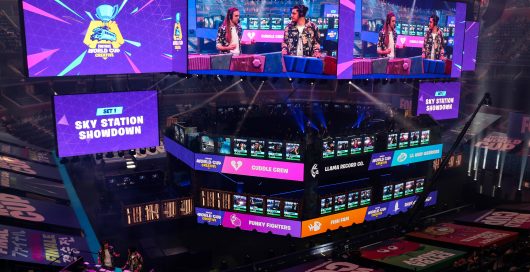 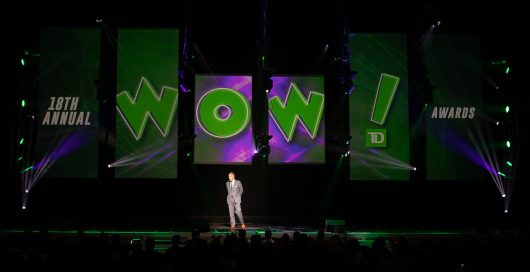