Metallica Drones! We got ’em!

Ranked No. 1 on Billboards “Hot Tours” list, Rock N Roll Hall of Fame band, Metallica, kicked off their European leg of Worldwired Tour which celebrates their tenth studio album, “Hardwired…to Self-Destruct,” released in November 2016. With a 14 week stretch of North American stadium shows already under their belt, Metallica turned it up a notch for their arena trek revealing a new set and stage design custom-built by TAIT and debuted the world’s first autonomous indoor drone swarm in a major touring act.

The fresh set and stage design gives concert-goers an immersive concert experience with a 44 ft. by 44 ft. square main stage equipped with several prop lifts located in the center of the arena.

Did You Know? There is over 2.2 miles of wire rope on the winches lifting a total of 20,000 lbs of video cubes over the stage and audience.

Building on the already impressive new aesthetic, Metallica performs their new single, “Moth into Flame,” with 100 drones. The drones emerge from the stage’s built-in prop lifts and as the music builds, the drones swarm into several formations above the band. With safety at the forefront, it is the combination of a reliable indoor positioning system with intelligent autonomous drones and a suitable operator interface that allows Metallica’s show operators to simultaneously control the coordinated movements of the drones.

For the world’s first autonomous indoor drone swarm for a major touring act, TAIT partnered with Verity Studios to introduce the latest drone technology to the bands production team. 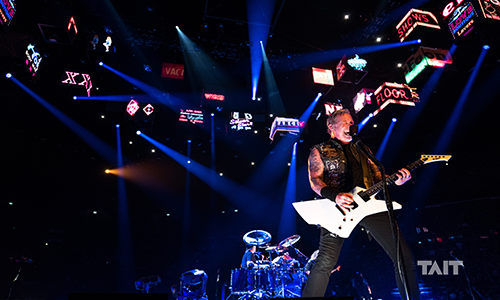 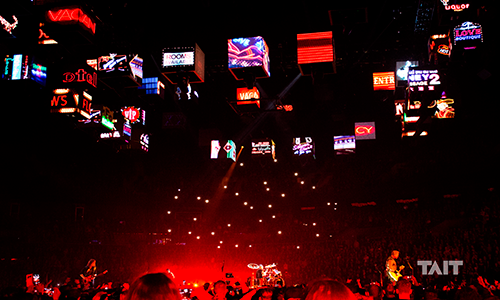 FUN FACT: If you count each individual propeller on the drones, there are 457 axis of motion on the show

With the amount of tech in this show, TAIT presents an interactive look book to explain and visualize the assets provided for Metallica’s WorldWired Tour. Additionally, TAIT met up with Dan Braun to discuss his role as Show Director and the design concepts that inspired the show. Dan’s feature on TAIT Talks is Live! 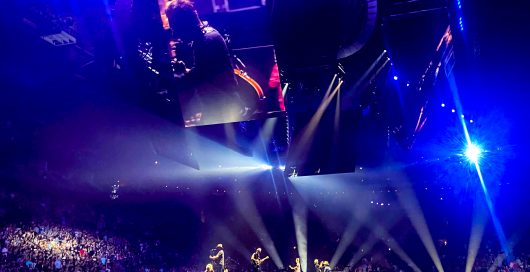